I caught on Twitter a few weeks ago that someone was trying out some false nails from Primark and that they were pretty good. So when I was in there last I picked up a packet to try them out for myself. At £1 for 24 nails I wasn’t expecting the earth but I was really, really surprised. These nails are great. 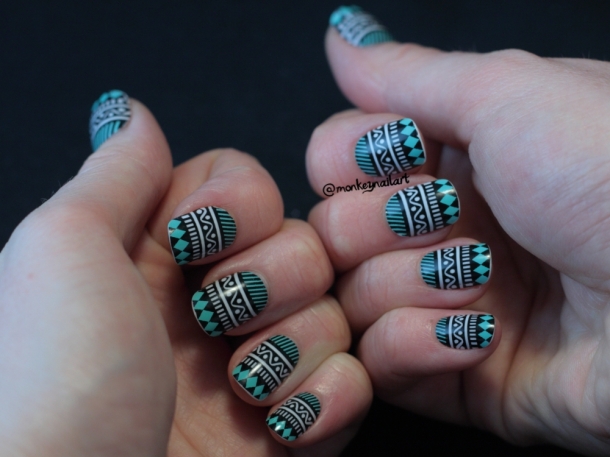 First up, I really like this design. I don’t think to do tribal nails very often but these just jumped out at me. Think about how long this design would take to do – sticking this instant design on takes SO much less time. I didn’t use the nail glue that came with these nails. I went with the stickers that I’ve been favouring of late. Tip: sticking nails on just before you’re about to drive/travel somewhere gives the adhesive a chance to properly fix to your nails – I had one nail come off in 24 hours, and by the end of three days I’d still only had three come off. I stuck them right back on and get another three days wear out of them! I was nearly crying by the time I took them off – I had totally fallen for them. 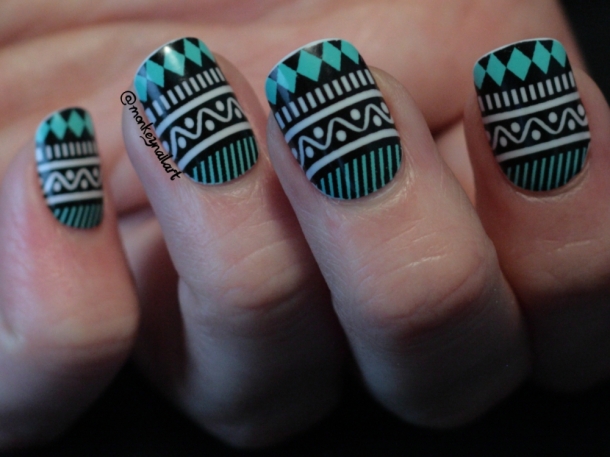 The shape of these nails is fantastic. They fit like a glove over my natural nails whilst hiding all the bits that I’m self conscious of (mainly the nubbinness of my index and little fingers!) Unlike the false nails I was wearing over Easter, the thumbnails aren’t too long and they don’t catch on things. In fact, the only nails I thought were a bit too long were the index fingers – hence why these were the first nails to come off. If they were just a little bit shorter they’d be absolutely perfect. The curve around the tips meant that I didn’t slice myself open on them either.

Somebody asked me on Monday if I was wearing nail wraps. She was surprised to hear that the nails themselves were stuck on. That’s how good these are.

When I took the nails out of the packet I was surprised at how flimsy they were. I’m used to false nails being quite thick and rigid but these are thin and flexible, which actually turned out to be a great thing. I didn’t feel like I was wearing false nails at all. When I accidentally bashed myself on things I didn’t feel like my own nails were about to be pulled out. Sometimes cheap is better!

The last point to make is that all these pictures were taken after I’d been wearing these nails for five days. Barely a scratch! You can see a couple of little dints in the design and a bit of curling around the cuticles but apart from that they really are good as new. And to top it off I’ve still got another set of them in the packet waiting to be worn!

If I haven’t sold you on these nails yet, then you really are a hard sell. For £1, you absolutely cannot go wrong with these. I’ll be picking up quite a few more (of some of the other fab designs) the next time I’m in Primark!